10 Reasons why the bus companies’ partnership proposals will not ‘revolutionise’ our buses: We need regulation.

Why do passengers and staff want a regulated network when £100 million has been offered for the alternative, partnerships?

The fact that bus companies are suddenly offering a £100 million partnership package as an alternative to regulation shows just how great re-regulation of our buses is, and how much bus companies will do to try to make passengers believe otherwise.

Here are ten reasons why the proposal is far from ‘a revolution’ as they claim and is in fact even more incentive for us in Greater Manchester to introduce better, London-style regulated buses.

This demonstrates that there is money in the bank, which shows that bus companies don’t need to make the cuts to bus services that they have systematically made since 2010, wiping off 8 million miles of routes from Greater Manchester’s network.

It’s frustratingly ironic that bus companies claim it will ‘deliver better connectivity for local communities’ when in reality they have done exactly the opposite for the past ten years and more.

Since deregulation happened in 1986 under Thatcher’s government, bus use has gone down by 40% in Greater Manchester. In London, where they have regulated buses, it has doubled.

Whether to regulate our buses or not is a decision Andy Burnham will be making in the next year, which puts local authorities in control of our buses. We’re calling on Andy Burnham to go with regulation and we’re building passenger power all across Greater Manchester to amplify this call.

We’re having our first public event on February 6th, 6:30-8:30pm at Manchester Art Gallery, for anyone who wants to find out more about how we can win better buses.

Their webpage shows that OneBus, the consortium of bus companies lobbying for partnerhips instead of regulation of our buses, have hired a PR agency to put forward their proposals. When we’re seeing cuts to our buses, we’re wondering why bus companies are spending thousands of pounds on communications agencies to influence decisions made on our public transport.

This will remind many of the way bus companies also use expensive legal challenges against a similar scheme to bring their buses back into public control in Tyne and Wear when regulation was considered, and unfortunately they succeeded.

Several academics say, as we do, that this is because bus companies tend to make higher profit margins in a deregulated setting.

Kate Bayliss and Giulio Mattioli of Leeds University in a recent paper write:

‘While there have been attempts to re-regulate the market outside of London since the 1990s, they have been fiercely opposed by the private operators, as their profits in a deregulated environment are much higher than in the London tendering system.’

They go on to highlight how bus companies ‘benefit from the status quo and lobby against reforms.’

A recent poll of 1000 residents in Greater Manchester, done with Survation, showed that 72% agreed that bus companies should not try to influence public decisions around whether or not to regulate the bus network.

Bus companies however would prefer to carry on giving their shareholders huge pay outs, amounting to £1.49 billion over the last ten years. 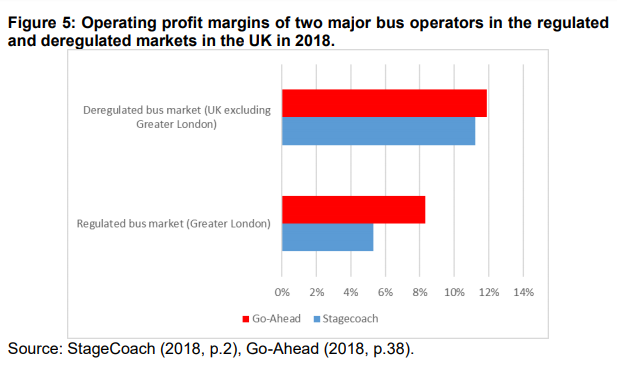 This is why we’ve deliberately decided to call out the fat cat shareholders with our event name: ‘Fight the Fat Cats.’ We think its appropriate to highlight how united we as passengers, staff and many politicians are across Greater Manchester against one that only serves shareholders and for a better, publicly controlled bus network,.

Re-regulation offers the long-term solution, an expanded, affordable, accessible and frequent bus network, and bus companies know it, so they’re bringing out sweeteners, in the hope that politicians will take their short-term, vague, not to mention unaccountable nor guaranteed offers.

This January some fares went up by nearly 7%.

Some 40% of bus companies revenue is public money. Yet the majority of services (around 80%), are commercially run, leaving us with no say at all over fares and routes. Passengers are tired of this. Now, a real alternative is on the table, regulation, so they’re suddenly offering cheaper fares, for a short time.

It does not make the fleet clean. We need a completely clean fleet to tackle the severity of the issue of climate change and poor air quality.

Manchester is so behind with clean buses: We’re have one of the worst polluting fleets in the country.This is because our current deregulated system means that bus companies have not been required to invest in clean buses, so they haven’t. In London’s regulated system, the Mayor directs bus companies and he has demanded that all double-decker buses are hybrid by 2019. In London 37% of all buses are electric or meet Euro 6 standards, in Greater Manchester this is just 10%.

This ‘ground breaking’ offer is merely their way of attempting to catch up with the rest of country, in the knowledge that passengers are tired to breathing in the toxic fumes from their old buses and the local authorities are demanding cleaner buses as part of their air quality plans.

It will also likely be required of bus companies to invest in new buses as part of new clean air plans anyway, so to say this is an offer to the people of Greater Manchester is a bit of a farce.

Regulation makes a simple smart card, with an automatic daily cap on spend (so that you’re guaranteed you’re getting the best price), possible. A vague offer like ‘simplified ticketing’ suggests that they can do better with ticketing, however the reality is that partnerships make a simple smart card impossible.

It is illegal for bus companies to cooperate in this way because of competition law, and they admit that ‘Operators will retain own-branded products’.

When bus companies resisted regulation in Tyne and Wear, they promised simplified ticketing. Tyne and Wear is still waiting for their simple smartcard.

We need one body overseeing and planning the network, to give us the integrated system that we as passengers deserve, and for bus companies to claim they can give us ‘simplified tickets’ when they cannot offer a London-style oyster card under a deregulated network could be seen as misleading passengers.

This leads us on to

6. The partnership offers are deliberately vague so that we cannot hold them to account for the things they have offered.

Under ‘Improved integration of bus, tram and rail services’, one of the ‘solutions’ partners offer is to ‘commit to exploring how integration with tram or rail might be improved’.

This is not good enough. If we regulated the bus network, timetables could be planned to join up with tram and trains services. Bus companies would be obliged to share more information with TfGM, so we could know if and trust that the bus was actually going to turn up at that time. We could access comprehensive, easy-to-find information.

We can’t get integration with over 30 different companies running buses in Greater Manchester.

In one partnership ‘solution’ they elaborate:

‘In addition to regular network reviews, any resulting implementation of network changes will be accompanied by wide and comprehensive publicity which will include reference to the consultation process and procedures for making further representation’.

If anyone understand what this is actually saying, please email us and let us know.

7. All of the above shows we have to be able to direct bus companies to deliver certain standards. Otherwise, they will not deliver. Public control of our bus network means we can tell bus companies what to deliver, from the bus colour to drivers pensions.

Martin Dean of Go Ahead recently said, while giving evidence to the transport select committee on accessible buses:

8. Bus companies are offering piecemeal ways of addressing congestion, which could be done far more effectively under a publicly controlled bus network.

The partnership includes their offer to ‘co-operate with Transport for Greater Manchester’, which sounds pretty basic to us.

Firstly, bus companies know that a regulated bus network is far more comprehensive, covering many more miles, and attracting far more people onto buses, for many of the reasons stated above. Tempting people out of their cars is the only way we’re going to tackle congestion meaningfully in the long run and transforming our bus network into a world class service is one of the big ways we’re going to achieve this. Regulated buses are a huge step in the right direction.

Secondly, Introducing measures like traffic light controls (to see if a bus is coming and stay green longer), and bus lanes can be bureaucratic.  If councils regulated the bus network and they were being held to account on their performance, it would be in their incentive to introduce more bus lanes, which would allow for much quicker journeys. Right now, introducing bus lanes is difficult, and councils are understandably reluctant to do this without assurance that this bus lane will be used by a bus company. With bus services being run on a contract basis, authorities will know in advance whether a service is going to run for 5-10 years.

This is among one of the many reasons why we are calling for you to join us to ‘fight the fat cats’ at our public event!

9. Bus companies are so worried about re regulation and its clear benefits, that they are attempting to launch project fear, saying regulation ‘would see taxpayers become responsible for the full cost of the bus network instead of the current system where the majority of costs are covered by bus operators.’

The statement that bus companies currently cover the ‘majority of costs’ flips on its head the fact that some 40% of bus companies revenue is public money. The rest is our fares. Yes, bus companies receive millions of pounds of public money, before we’ve even paid our fares, and us passengers and local authorities have no control over commercial bus services (which make up around 80% of services). Our money is already paying for a bus network, however the one we have currently is not good enough. Regulation forces bus companies to deliver more with the same amount of money.

Re-regulating the network, according to research by Transport for Quality of Life, has the power to generate savings of £340 million annually across the UK. This is partly due to capturing excess profit, as bus companies are commissioned on a contract basis to deliver specific services which is far more cost efficient.

In Jersey, regulating buses saved the state £800,000 a year on subsidy to bus companies.

Bus companies say regulation is expensive, but the reality is deregulation is costing us a lot for a worsening service, while regulation offers a way to save money.

10. They say that their benefits can be ‘delivered far quicker through a partnership approach’ but this is true only because they are such short-term benefits.

Note how many of the offers are 2 or 3 years. After the threat of re-regulation is out of the way, bus companies will revert to old practices, hiking fares and cutting services to pay shareholders as much as they can.

We don’t have £100 million to put towards offers, but we know that we need a public controlled bus network in Greater Manchester, one that is green, affordable, 24 hour, accessible and accountable to us, because we’ve let you run the bus service for the past 30 years and it hasn’t worked.

OneBus ends by saying ‘only by bus operators, the Mayor and the region’s local authorities working together, can we give Greater Manchester, its economy and its communities the dynamic bus network to shape our world-class city region.'

Work with us on the publicly controlled, better bus network we’re calling for.

Join us to take action at ‘fight the fat cats and win better buses for Greater Manchester’, our first public event for anyone who wants to get involved:  Wednesday 6th February, Manchester Art Gallery 6:30-8:30pm.

If the Tories thought deregulation was so great, they'd have allowed it to happen in London.

The mere fact that they didn't tells you all you need to know.